It has been a difficult month for us over here West of the Ashley River, but the show must go on. We have a harvest meal in the works with the lovely couple running Blue Pearl Farms in the near future and some other projects we are excited about. Stay tuned for those details.

While the month from hell was/is drudging on, I found myself in Atlanta, Georgia last weekend to visit a college friend. As I was packing, I was day-dreaming about Usher songs and new and different foodie bites to try. And y’all know I was crossing my fingers for a Real Housewives siting. I actually went looking for them, but more on that later. I’m not a stalker, I swear.

My first night in the ATL was made up of box wine (classing the place up since ’05), reminiscing, some eye-opening truths, and laughing fits. My first morning in the ATL was made up of College of Charleston sized hangovers, my long lost ability to rally, some hair of the dog, and the Chef’s omelet at D Café and Catering in the Westview neighborhood. We also tried the salmon cake (#thebomb), extra buttery grits, and super fluffy biscuits.

As we were finishing the chef came out to our table to ask if we would like to try a fried pie or two. Is there a person who would say no? If there is, it is definitely not us. Bring on the fried dough and sugar! We tried an apple one and a sweet Georgia peach one. When in Georgia, the peach wins always.

With bellies full of a down-home breakfast, we headed to a family birthday party. The birthday girl had asked for a scavenger hunt, so we headed to Piedmont Park to sweat. I mean scavenger hunt. I’m pretty sure we won, but there were some differences of opinion. A word to my future scavenger hunt partners: I am the teammate in charge of documenting the game on Snapchat, as well as the one who consistently asks, “How much longer until we get to the bar at the end of the clues?” I’m not completely useless, but if you take your game play seriously- pick another teammate. We ended up at the bar RIGHT INSIDE THE PARK. I had a couple refreshing cocktails, the “real adults” scared all of us “baby adults” with credit card roulette, and then we headed back up the street to the air conditioning to play cards.

The day was long, hot, fun, and everything I needed.

The next morning my host headed out to take Atlanta’s children to camp and I lazed around a bit longer until I dragged myself out of bed and headed out for a solo trip to Ponce City Market, home of the H&F Burger. H&F Burger is the brain child of James Beard award winning chef, Linton Hopkins. And although it was 11am and eggs would have been a more appropriate brunch option, I went for the burger. I’m so glad I did- two thin patties, melt-y cheese, pickle and onion toppings only, and served with a side of salty fries.

I left knowing I was going to try to re-create the winning cheeseburger at home. But first, REAL HOUSEWIVES. I was informed (after she shot down my RHOA bus tour idea the day before) that most of them live in the Buckhead area. The conversation went no further and I was excited because I was secretly remembering I had seen signs for Buckhead on my way into Atlanta and that I possibly, probably, definitely was going to stop through on my way home.

Don’t ever make secret plans. Because if I had told my friend of my idea to “run in to a Real Housewife at Whole Foods in Buckhead,” she would have told me that there are two Buckheads. She would have said the Buckhead area INSIDE Atlanta is home to some of the ATL’s most affluent families, including a couple of my favorite Bravo celebs, but that the Buckhead OUTSIDE Atlanta is home to what I only assume is the backdrop for the next horror movie filmed in Georgia. I went to the wrong Buckhead and did not see one. single. Housewife. Oh well.

Heading home I mentally prepared to source my copy-cat burger ingredients from some of my favorite Charleston shops and got ready for another week back in Charleston.

First thing Monday morning I went in search of ingredients for what would eventually be The Charleston Smashburger. I started at Saffron Bakery, hopped over to the glorious goat.sheep.cow cheese shop, and then ended up at Artisan Meat Share picking up buns, stinky cheese, ground beef, and pickles. The burger would not be an exact copy-cat of the H&F burger, just inspired by it.

To make the smashburger, you literally just smash the burger as it is cooking, letting the edges crisp up. I made the patties a bit smaller than normal (think slider-sized, but super thin) and doubled them up on the buns.

The burger was complete with some bread and butter pickles from Artisan Meat Share and some carefully caramelized onions. I die. 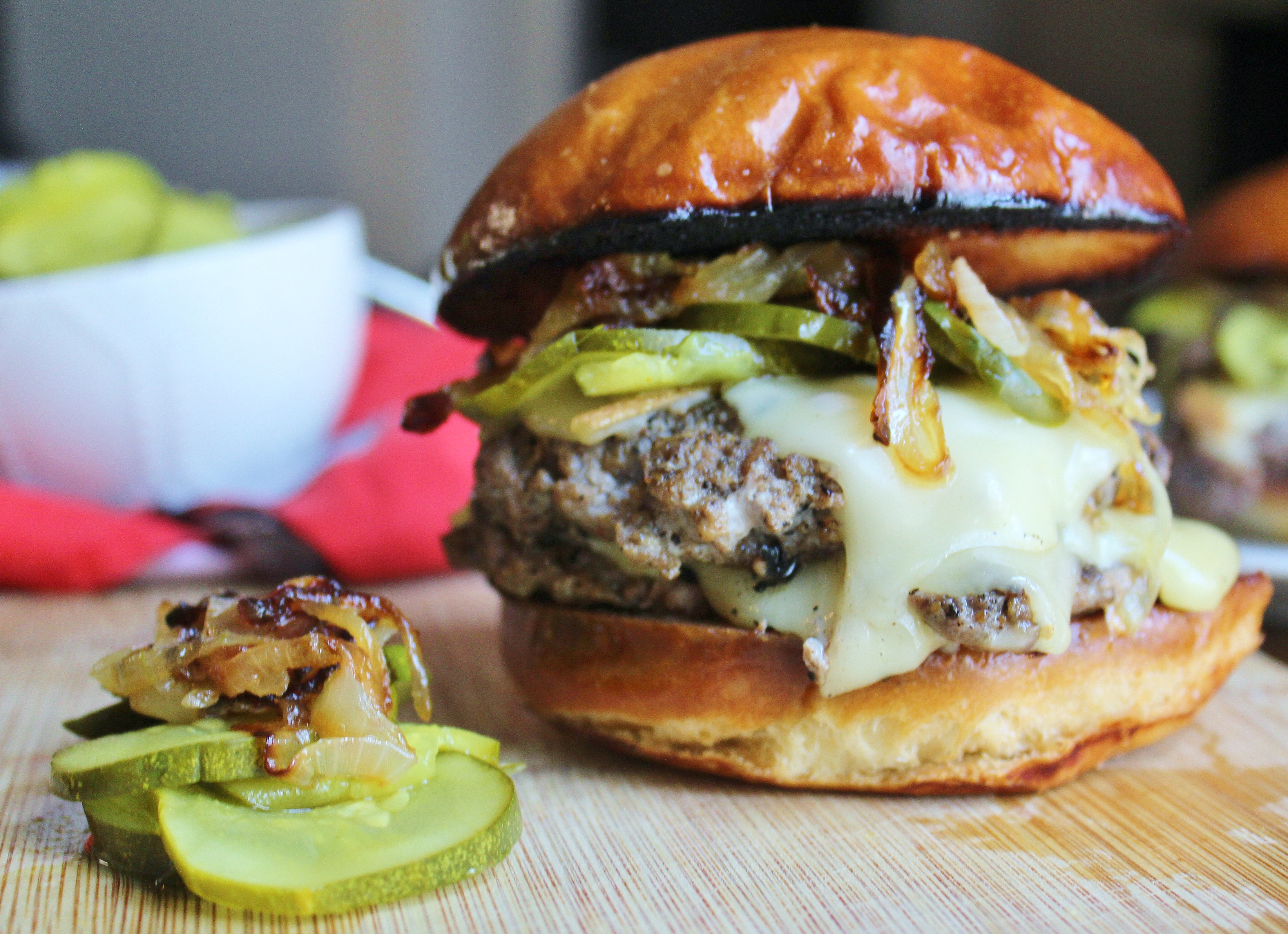 6 slices of your favorite stinky cheese

Divide the ground beef in to 6 equal balls. Smash the balls as thin as you can without them breaking apart. Heat a cast iron skillet to medium-high heat and cook each patty on both sides until the edges are crispy. Remove to a plate and place a slice of cheese on each patty and cover to melt the cheese. You may have to do this in 2 or 3 rounds. When all the patties are done, place 2 patties (one on top of the other) on a bun and top with pickles and onions. Repeat for all three burgers.

We’ll be back later in the week with some corn chowder and other anecdotes from Charleston.